While the "day or hour" may not be known, never did he say we couldn't know the year or
season of his coming.

Here are those evidences

4. Irenaeus > disciple of Polycarp > disciple of John the Apostle, says Genesis chapter 1 is a prophecy, of the end coming at the 6000th year (full quote below).

6.  The Encyclopedia Britannica (11th edition) says there was a wide spread doctrine of the 6000th year throughout  Judea, among the Rabbis  in the 1st century BC (Millenium pg 459).

7. Hosea 6:2 "After two days he will revive us: in the third day he will raise us up, and we shall live in his sight", showing millenial day time keeping.

8. In Josephus' Talmud commentary, Tanna Debe Eliyyahu,  he tells of the Epistle of Elijah (which still existed in his day) that there would be three 2000 year eras = 6000 years (more below).

12. Ernest L. Martin Chronology (chart below) of the 6000th year in 2028. This is a strait year count from the bible, with no faulty man made calendars used!

13. The book Tribulation by R.H. Vargo on Amazon has several alternative 360 day calculations, all coming, incredibly, to 2028.

14. Luke 10 - Christ's Parable of the Good Samaritan, paying two pence, which is two days wage, or two millenial day's wage. Here's the mystery unfolded "Take care of him and what ever more you spend, WHEN I COME AGAIN, I will repay you."

16. Joshua 3:4 - 2000 cubits ahead of the people, into the promised land with the Ark of the covenant, foreshadowing our promise, 2000 years ahead, Christ would fulfill.

More Evidences Are Below

This chronology chart in a deeper research here 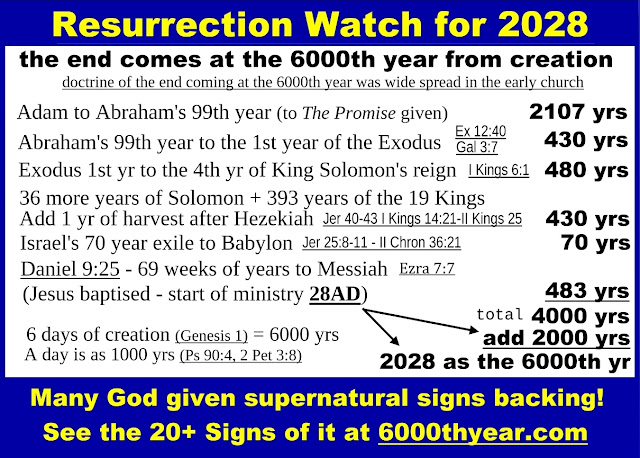 This chart is not using any faulty man made calendars, but is a year count strait from
the bible, to the 4000th year.

This chronology shows the modern day Jewish calendar is unaccountable,  over 200 years off,  with cold hard math and scriptural backing, to every portion.

The Jews to this day still hold to the doctrine of the 6000th year, that Messiah must come by then.

Many modern prophecy teachers are relying on the year count faulty data of Ptolemy, including the famed chronologist, James Ussher. Such faulty data has deceived the vast majority of prophecy teachers who think we are past the 6000th year. Our chronology here is only a 31 year difference from Ussher's, who says the world started in 4004 BC, putting his 6000th year at 1997 - 1997 + 31 = 2028

The popular Rabbi Jonathan Cahn and Author Tom Horn rely on the faulty Essene solar calendar, looking to 2075ish for his coming then. The Essenes were igno to the scriptural agro/lunar, Abib barley season resetting the calendar every year, which by default, follows the solar calendar, so there was never a need for the Essene calendar in the 1st place.

If the chronology chart above is wrong, it would err on the side of being past the 6000th year. And there are too many years to account, for it to be less. If there are doubts to the year 2028, then the supernatural signs backing this are a testimony against that.

These evidences make it clear. The 6000th year is what to watch for, regardless of knowing the exact year, but 2028 does provide for the strongest of evidence. We should be watching in faith, believing the very strong evidence presented herein, for 2028 or close to it,  for his coming then. 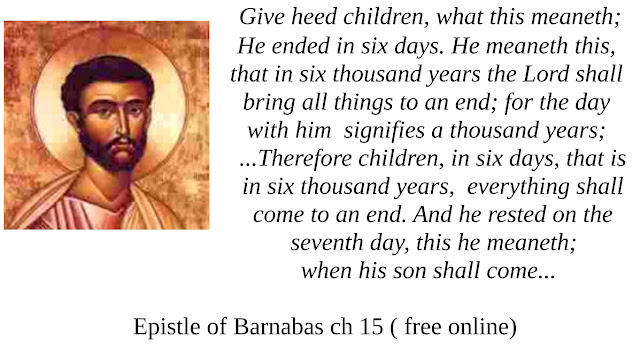 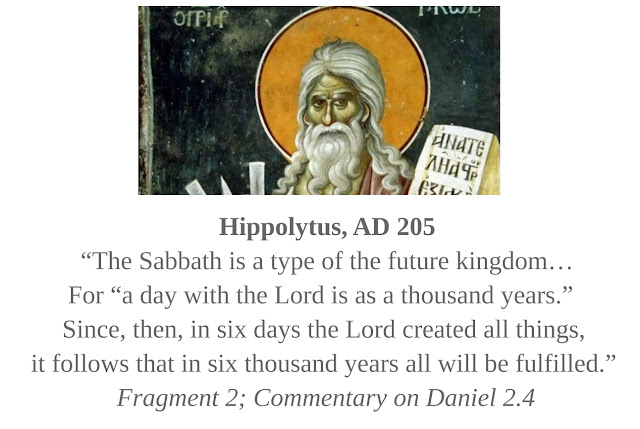 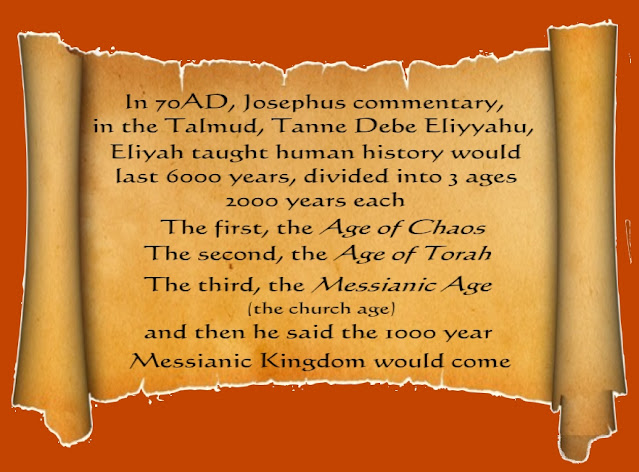 Now please visit prophecybase.com for why so many Christians have unrealistic Preterist and Futurist, 17th Century Jesuit spun, false prophecy expectations.
Right before the year 6000,
expect other prophecy here to come to pass...
And very soon
Home
View web version